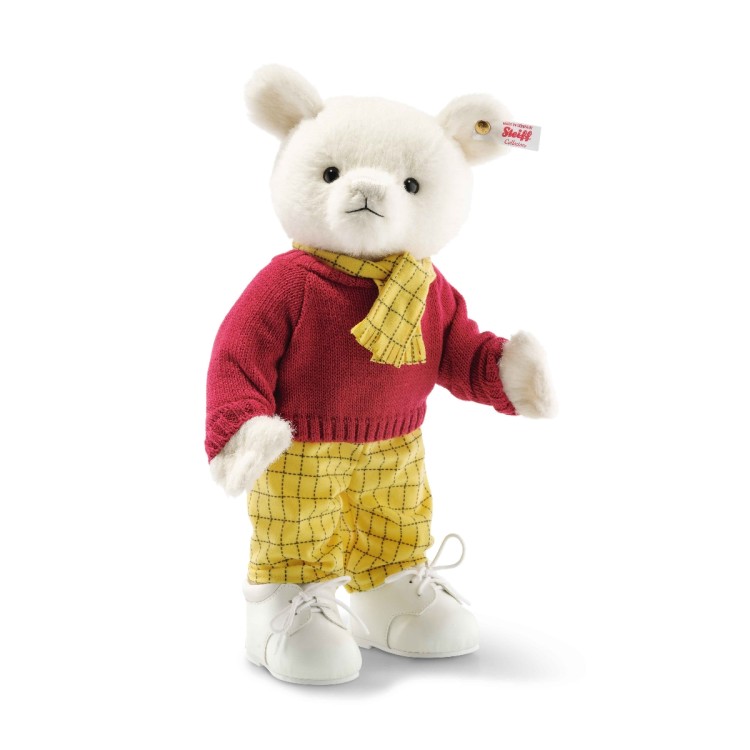 There's a little bear Like you've never seen before Who's a lot of fun Children everywhere grow to love him more and more He's the number one The loveable bear from Nutwood is eight years older than Mickey Mouse, six years older than Winnie the Pooh and thirty eight years older than young Paddington! He was in fact the very first really famous bear. One of the most memorable elements of Rupert has to be his oh so catchy theme song to his TV series, sung by Jackie Lee, which reached number 14 in the UK charts in 1971. He first appeared in the Daily Express on November 8, 1920 and has been anthologized in Annuals since 1936. Join Steiff in congratulating Rupert reaching his 100th birthday with this enchanting musical Rupert whose heartbeat plays “Rupert”, that famous classic song. In the 1920s there was a Vogue for children’s cartoons in British newspapers. The Express turned to Mary Tourtel who created the little bear – “Little Bear Lost”. Still running daily, Rupert is one of the longest running children’s cartoons in newspapers anywhere in the world. He by far exceeded everyone’s expectations and captured the imagination and affection of the nation. Rupert celebrates 100 years of heritage. Mary Tourtel flung Rupert into a fairy-tale world of magic spells, ogres, flying witches, dragons and wolves in scenes of true wonderland. So magical and marvellous were his tales that his image became known worldwide from Abu Dhabi to Zambia and beyond! He is a childhood favourite of so many and now a Steiff favourite! Steiff have truly excelled in designing a triumphant interpretation of a magical little bear, no longer lost.